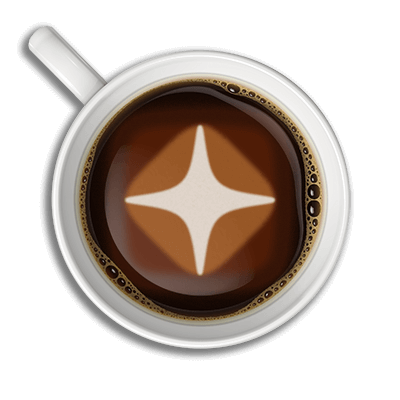 Ristretto is a technique for constructing prime order elliptic curve groups with non-malleable encodings. It extends Mike Hamburg's Decaf approach to cofactor elimination to support cofactor-\(8\) curves such as Curve25519.

In particular, this allows an existing Curve25519 library to implement a prime-order group with only a thin abstraction layer, and makes it possible for systems using Ed25519 signatures to be safely extended with zero-knowledge protocols, with no additional cryptographic assumptions and minimal code changes.

Ristretto can be used in conjunction with Edwards curves with cofactor \(4\) or \(8\), and provides the following specific parameter choices:

This site is organized into several chapters:

Ristretto was originally designed by Mike Hamburg; the notes on this page were written by Henry de Valence, with contributions by Isis Lovecruft and Tony Arcieri, and any mistakes are ours.

In many existing protocols, the complexity of managing this abstraction is pushed up the stack via ad-hoc protocol modifications. But these modifications are a recurring source of vulnerabilities and subtle design complications, and they usually prevent applying the security proofs of the abstract protocol.

On the other hand, prime-order curves provide the correct abstraction, but their formulas are slower and more difficult to implement in constant time. A clean solution to this dilemma is Mike Hamburg's Decaf proposal, which shows how to use a cofactor-\(4\) curve to provide a prime-order group – with no additional cost.

This provides the best of both choices: the correct abstraction required to implement complex protocols, and the simplicity, efficiency, and speed of a non-prime-order curve. However, many systems use Curve25519, which has cofactor \(8\), not cofactor \(4\).

Ristretto is a variant of Decaf designed for compatibility with cofactor-\(8\) curves, such as Curve25519. It is particularly well-suited for extending systems using Ed25519 signatures with complex zero-knowledge protocols.

Pitfalls of a cofactor

Curve cofactors have caused several vulnerabilities in higher-layer protocol implementations. The abstraction mismatch can also have subtle consequences for programs using these cryptographic protocols, as design quirks in the protocol bubble up—possibly even to the UX level.

The malleability in Ed25519 signatures caused a double-spend vulnerability—or, technically, octuple-spend as \( h = 8\)—in the CryptoNote scheme used by the Monero cryptocurrency, where the adversary could add a low-order point to an existing transaction, producing a new, seemingly-valid transaction.

In Tor, Ed25519 public key malleability would mean that every v3 onion service has eight different addresses, causing mismatches with user expectations and potential gotchas for service operators. Fixing this required expensive runtime checks in the v3 onion services protocol, requiring a full scalar multiplication, point compression, and equality check. This check must be called in several places to validate that the onion service's key does not contain a small torsion component.

Why can't we just multiply by the cofactor?

In some protocols, designers can specify appropriate places to multiply by the cofactor \(h\) to "fix" the abstraction mismatches; in others, it's unfeasible or impossible. In any case, multiplying by the cofactor often means that security proofs are not cleanly applicable.

Another option is to mandate that all scalars have particular bit patterns, as in X25519 and Ed25519. However, this means that scalars are no longer well-defined \( \mathrm{mod} \ell \), which makes HKD schemes much more complicated. Yet another approach is to choose a torsion-safe representative: an integer which is \( 0 \mathrm{mod} h \) and with a particular value \( \mathrm{mod} \ell \), so that scalar multiplications remove the low-order component. But these representatives are a few bits too large to be used with existing implementations, and in any case aren't a comprehensive solution.

Rather than bit-twiddling, point mangling, or otherwise kludged-in ad-hoc fixes, Ristretto is a thin layer that provides protocol implementors with the correct abstraction: a prime-order group.

Ristretto is a construction of a prime-order group using a non-prime-order Edwards curve.

The Decaf paper suggests using a non-prime-order curve \(\mathcal E\) to implement a prime-order group by constructing a quotient group. Ristretto uses the same idea, but with different formulas, in order to allow the use of cofactor-\(8\) curves such as Curve25519.

To do this, Ristretto defines:

The Ristretto construction is described and justified in detail in the next chapter, and explicit formulas aimed at implementors are in the Explicit Formulas chapter.

This section contains details and justification on how and why Ristretto works, and a derivation of the formulas contained in the Explicit Formulas chapter.

Ristretto uses the same strategy, but with a different isogeny, different sign choices, and is explicitly designed to cover the cofactor-\(8\) case, making it easy to use with a cofactor-\(8\) curve such as Curve25519. This construction also allows implementations to replace the Edwards form of Curve25519 with a faster curve while maintaining interoperability.

Decaf and Ristretto make use of three curve shapes: Jacobi quartic, twisted Edwards, and Montgomery, and isogenies between them.

From Jacobi to Edwards and Montgomery via \(2\)-isogeny

The isogenies used by Decaf are parameterized in terms of \(a_1, d_1\). In the Decaf paper, these are written as \(a, d\), but they're relabeled here to avoid confusion between Decaf and Ristretto parameters.

From Montgomery to Edwards via isomorphism

From Jacobi to Edwards via Montgomery

Transporting an encoding along an isogeny

The following conceptual diagram relates Decaf and Ristretto. More details on its interpretation will be added in the future.

The right-hand column, groups & encodings, connects the byte strings produced by the encoding (middle, far right), to the quotient group constructed by Ristretto (bottom, far right), via all intermediate structures. (In practice, the encoding formulas pass directly from beginning to end; this is a conceptual diagram).

The center column, curves & isogenies, shows the relevant curves and their relationships. 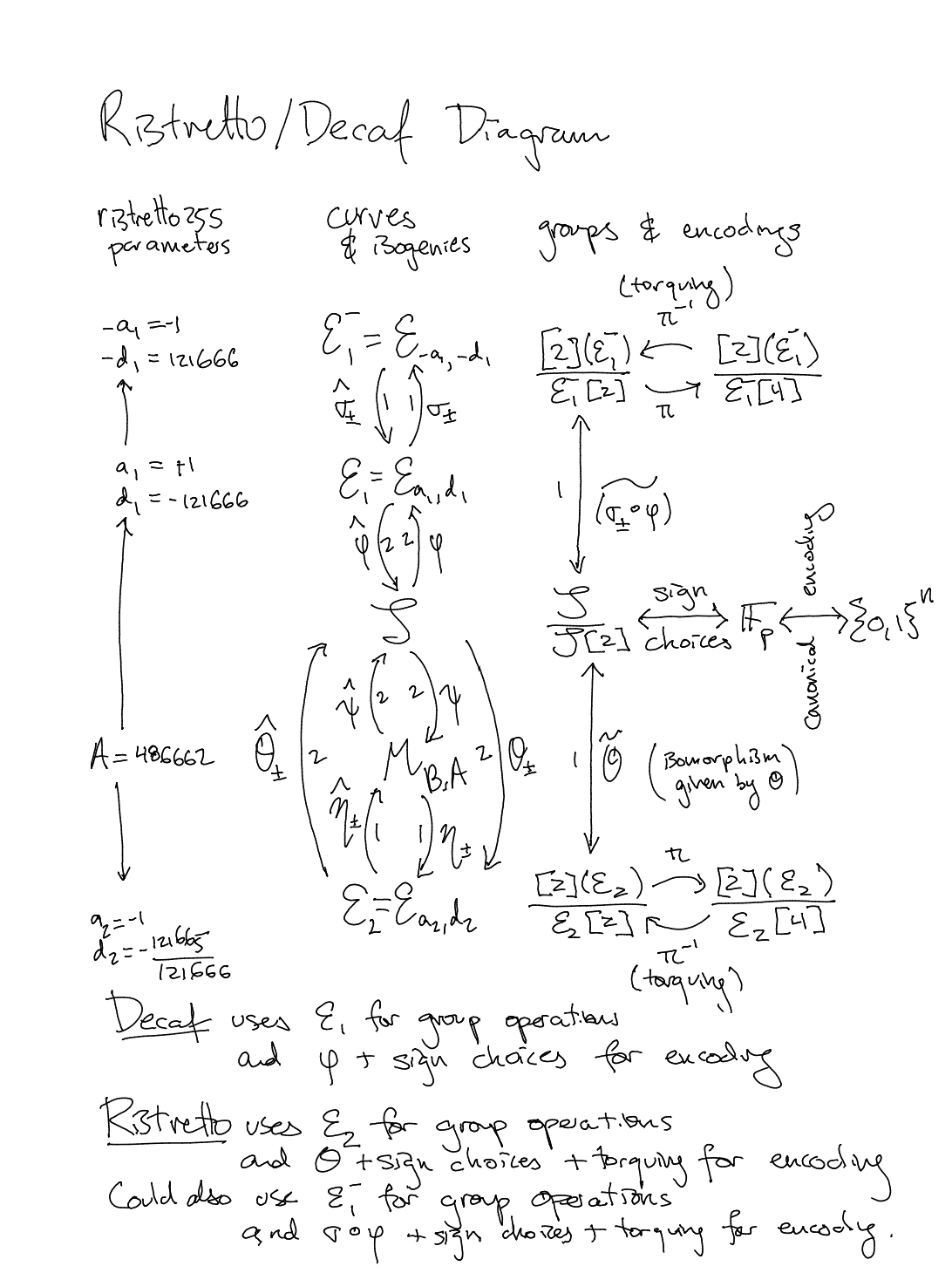 We can write the Ristretto encoding/decoding procedure in affine coordinates, before describing optimized formulas to and from projective coordinates.

The output is then the (canonical) byte-encoding of \(s\).

How does this procedure correspond to the description involving \( \theta \)?

Recall that to choose a canonical representative of \( (s,t) + \mathcal J[2] \), it's sufficient to make two sign choices: the sign of \(s\) and the sign of \(s/t\). Step 2 determines the sign of \(s/t\), while step 3 computes \(s\) and determines its sign (by choosing the positive square root). Finally, the check that \(y \neq -1\) prevents division-by-zero when encoding the identity. If the inverse square root function returns \(0\), this check falls out of the optimized formulas for projective coordinates.

Using this trick, we can write the encoding procedure explicitly:

As with encoding, we want to batch operations to use only a single inverse square root. However, the procedure is much simpler since there's no torquing.

Equality testing of points on the Edwards curve requires comparing to affine coordinates, which requires an expensive inversion. However, testing whether two points lie in the same coset can be done in projective coordinates, making it actually easier than equality testing in the original non-quotient group.

The Decaf paper explains how to formulate a map from field elements to points suitable for hashing to group elements. Rather than mapping directly to the Edwards or Montgomery model, Decaf suggests using Elligator 2 to the Jacobi quartic \(\mathcal J\), then applying an isogeny to obtain a point on whichever curve is used for implementing group operations. This allows implementations using different curves internally to have compatible Elligator maps.

This method also applies to Ristretto, with a suitable change of variables.

Applying the isogeny \(\theta\) to \(s,t\) gives a point on \(\mathcal E_2\). When the denominator is zero, the Elligator result should be a 2-torsion point, but as noted in the Decaf paper it does not matter which one, since we quotient out by \(2\)-torsion anyways.

Elligator for ristretto255 in extended coordinates

This can be implemented for ristretto255 with a single square root computation, using the sqrt_ratio_i function described in the explicit formulas section. To make this work, ristretto255 chooses \(n = i = +\sqrt{-1}\) as the quadratic nonresidue.

In summary, we can compute the Elligator map directly to extended coordinates as follows.

As mentioned in the What is Ristretto chapter, Ristretto defines a new point type, together with formulas for encoding, decoding, equality checking, and hash-to-point operations.

This chapter contains explicit formulas for these operations, aimed at implementors.

A note on type safety

For these reasons, Ristretto points should have a different type than curve points, and it should be a type error to mix them. In particular, it's dangerous and unsafe to implement the Ristretto functions as operating on arbitrary curve points, rather than only on the representatives contained in a distinct Ristretto point type.

This page explains how to extract an inverse square root function suitable for use with ristretto255 from an implementation of Ed25519.

There are four possibilities when \(u,v\) are nonzero:

The first part of the return value signals whether \(u/v\) was square, and the second part contains a square root. Specifically, it returns

To decode a byte-string s_bytes representing a compressed Ristretto point into extended coordinates, an implementation proceeds as follows.

Since \( a = \pm 1 \), implementations can replace multiplications by \(a\) with sign changes, as appropriate.

The ristretto255 test vectors include checks for non-canonical decoding.

To encode a Ristretto point represented by the point \((X:Y:Z:T)\) in extended coordinates, an implementation proceeds as follows.

Since \( a = \pm 1 \), implementations can replace multiplications by \(a\) with sign changes, as appropriate.

The inverse square root in step 3 always exists when \((X:Y:Z:T)\) is a valid representative.

Unlike testing equality on the Edwards curve, this does not require an inversion and can be done in projective coordinates.

The hash-to-group operation applies Elligator twice and adds the results.

ristretto255 encodes group elements using 255 bits and provides a prime-order group of size 2^252. It can be implemented using Curve25519.